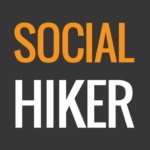 We left and started are hike just after 5 am. We were a large group that splintered into two groups. I pushed myself forward to remain with the front of the large group, while the remainder of the group stayed or walked with the sweep, or person volunteering to be at the rear. He was initially our hike leader and organized the hike, so he later joked that he had wished to be with us at the front. Since it was still very early, we were able to see some city lights as we went up in elevation. I was impressed, first that it was comfortably coo, and later that we went forward through forest. I wanted to snap pictures around every turn in the switch backs that we followed, but knew that I would fall behind if I did. We reached “the bench”, and I was exhausted. One member in the group turned back at that point. I had no idea that more strenuous hiking lay ahead. When we did finally reach the top I noticed, that the members of the front group had already taken some pictures and were now headed toward the restrooms and observatory. I hurried my pace and caught up with them to get in some group  photos near a look out ledge with railing. The heat would not be a problem until we descended past the tree line to where there was simply bare rock. I knew, as tired as I was, that to stop meant just standing in direct sunlight with the sun beating down on me. So I pushed on, miserably wondering in sweltering heat, whether I should hang up my poles for good and accept a life of sedentary leisure. Being uncomfortable and in no mood to further converse with my wonderful comrades, I quickly said my good byes then raced to my car. I fired up the AC, and after a few minutes, I remembered my question. I answered it with a smile and said, “Next is Mt. Baden-Powell. 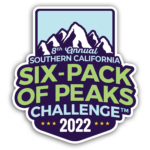 Join the Challenge! Flex your adventure muscles in 2022. Registration for the 2022 challenge is open, with a total of 12 peaks to choose from.

Super Hard for me but done!!
Congratulations to SoCal Six-Pack of Peaks challenger Christy on her summit of Cucamonga Peak with her husband and son-in-law. It *is* a tough hike!

Congratulations to SoCal Six-Pack of Peaks challenger Cynthia for her summit of Mount Baldy, the highest peak in LA County.

Are you taking the challenge? Learn more at the link in our bio!

Hike or run up six iconic SoCal mountains at your pace, and at your schedule. It's not a race... it's an adventure!

Sign-up by the end of July before the price increases! Hit the link in our bio for details.

Happy #FinisherFriday to SoCal Six-Pack of Peaks challenger Michael. He completed the challenge on July 16th with his hike up Ontario Peak (pro tip: bring lots of water!).

DID YOU KNOW... there are 162 days left in 2022? That's 162 opportunities to make a difference in your life. To set big, gnarly goals. To climb mountains. To complete the challenge. Sign-up today at the link in our bio.

Congratulations to Lee for his epic summit of San Gorgonio. He turned the route into a 23 mile+ loop.I can't think of a better sufferfest to celebrate your birthday with.

Have you joined the challenge? You have 173 days left to complete the SoCal Six-Pack of Peaks Challenge, so sign-up today! Learn more at the link in our bio.

Congratulations to SoCal Six-Pack of Peaks Challenger Brandy for her summit of Ontario Peak yesterday. Looks like it was a beautiful day to hike!

Join the challenge today and you'll have nearly six months to hike six peaks. Learn more at the link in our bio.

It's #FinisherFriday! Congratulations to the Cooley Family for completing the SoCal Six-Pack of Peaks Challenge. The entire family, summited six peaks!
Do you hike peaks with your family? Join the challenge! [link in bio]

Congratulations to SoCal Six-Pack of Peaks Challenger Cori and her friend for their first peak in the challenge -- Mount Baden-Powell! They were fortunate to hike it and depart safely, since the Sheep Fire started up that same day.

Be safe out there!

Great shot from challenger Linda's hike up Ontario Peak this past weekend.
Where did you hike last weekend, and where are you headed this weekend?

San Gorgonio, You Are a Sexy Beast! Kudos to challenger Hali for summiting and CAMPING at the top of San Gorgonio. Awesome sunset photo.
Join the community -- join the Six-Pack of Peaks Challenge (link in bio).

Congrats to SoCal Six-Pack of Peaks Challenger William for his summit of Mount San Antonio (aka Mount Baldy), which incidentally is neither 29,000 feet high nor in The Rockies. 😝

Hiking season is here! Join the challenge today. Learn more at the link in our bio.

This origin story began (oddly) with a mountain bike accident, a recollection of a past adventure, and a dream of a gnarly, big new adventure -- hiking the John Muir Trail 30 years after the first time.

This led to the creation of the original Six-Pack of Peaks, which helped Jeff and Joan train and prepared them both physically and mentally for the challenges of the JMT.

And on August 17, 2010 -- 22 days after they set our from Yosemite Valley -- they reached the summit of Mount Whitney, the highest peak in the contiguous 48 states, and completed the John Muir Trail.

They had logged many miles in their training, and the Six-Pack of Peaks was instrumental to their success.

And two years later, they were married!

At 11,490 feet San Gorgonio Mountain is the tallest peak in Southern California. The trail is the longest in the Six-Pack of Peaks. And the vertical gain nearly 5-1/2 thousand feet.

Once again, Jeff led a group from Hiking OC to the top of the mountain, capping off the original Six-Pack of Peaks in style.

A SIX-PACK OF PEAKS ORIGIN STORY
They had been hiking one of these long peaks every weekend, and the fifth mountain was Mt San Jacinto. Most people hike up this from the Palm Springs Tram, but Jeff and his group hiked from the long, steep Marion Mountain trailhead.

At this point in the challenge, we were feeling strong and confident.

A crooked group photo on the San Bernardino Peak trail is appropriate here. 😉

On Friday evening, June 18th, Jeff had a martini (maybe two). On Saturday June 19th, he "led" this group to within less than a mile from the summit of San Bernardino Peak, whereupon the martinis from the night before said "you're stopping here, buddy." Jim and Lily led the group to the peak, and we descended together. Lesson learned. 🍸

June 12, 2010 they reached a milestone -- the first peak in the challenge over 10k feet -- Mount San Antonio (aka Mount Baldy). The air was thinner and colder, but Baldy is always rewarding.

Though the mileage was shorter than Cucamonga Peak, putting Baldy third in the challenge made sense as they could see how their bodies did at higher elevation.

TLDR: Everyone summited and survived with smiles

Next up was Cucamonga Peak. This is a tough out-and-back hike and there were patches of snow on the north side of the mountain to keep things interesting.

Jeff came up with six progressively taller SoCal mountains for the original Six-Pack of Peaks. The first was Mount Wilson. The 5,699' peak was lower and so it could be hiked in May while snow still covered some of the higher peaks.

HOW IT STARTED, PART 3
In 2009, Jeff was leading a weekly after-work hike on "Roller Coaster Ridge" in San Clemente. He shared his goal of thru-hiking the JMT in 2010 with Joan. His enthusiasm was infectious. Soon they were dating (they are now married) and she decided she wanted to thru-hike the JMT as well!

Jeff started up SoCalHiker to write about his preparation for the JMT, sharing what he learned as he hiked, trained. He knew they would have to prepare themselves physically and mentally for hiking double-digit miles for 22 consecutive days.

They added additional conditioning hikes with lots of elevation gain and mileage. But they needed more.

And so, the Six-Pack of Peaks was born.

2010 would be the 30th anniversary of that life-changing backpacking trek. It seemed like a good idea to hike the JMT again. And so a plan was hatched to thru-hike the JMT a second time, 30 years after the first.

Glenn posted a new hike log. an hour ago